Despite all the market uncertainties surrounding the are-we-in-or-are-we-out Brexit fiasco, asset finance figures have been achieving ever-higher levels of new business overall.

The March 2019 report from the Finance and Leasing Association (FLA) shows a record level of monthly new business of £3.7 billion. That’s up 11% on March 2018.

For new finance arrangements of up to £20 million, business increased by 7% to £3.4 billion in March 2019, as compared with the same month last year and rose by 9% over the whole quarter.

All the main asset finance areas showed growth in new business during the period, some into double figures. We’ve collated the figures for the major asset finance sectors and present them here in an at-a-glance format.

The commercial vehicle finance sector new business reported in March had increased by 17% since March 2018, rising to £994 million. The Q1 2019 period showed an increase of 23% compared to the same quarter in the previous year.

A detailed view of new business for the period is shown below: 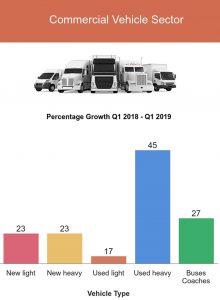 The IT finance sector recorded new business increases of 5% compared with March last year, to a figure of £211 million.

The plant and machinery finance sector showed increased new business figures up to £728 million in March this year, a rise of 11% over the same month in 2018.

A breakdown is below: 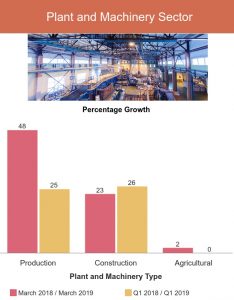 The Society of Motor Manufacturers and Traders reported a decrease in business and fleet new car registrations of 3.9%.

Finance leases and hire purchase agreements new business increased by 15% and 14% respectively in the first quarter of 2019, comparative to the same quarter in the previous year.

If you’d like more information on how using asset finance could help you achieve your business goals, just give us a call on 020 7520 9450 or visit our contact page.