As personal devices become more and more sophisticated they are now challenging the technology that is offered by the very companies and organisations that people work for. Such is the consumerisation of IT that it is estimated that by the end of 2013 over 60% of organisations will accept Bring Your Own Device (BYOD) into the fold.

Yet the argument rages on about whether being able to use personal devices is as effective as its supporters and proponents claim. One of the main advantages of BYOD has often been presented as increased worker productivity (more profit), but according to Nucleus Research, only a handful of companies surveyed reporting a positive return on investment from BYOD policies.

But does it have to be about money?

The fact is allowing people to use their own personal devices isn’t just about increasing company profits.

One extreme yet poignant example is with regard to the use of personal devices in the military. For servicemen and women regular communication can keep them in touch with the daily lives of their families and can make a huge difference in terms of morale.

In the past servicemen and women could go months without getting a letter from home but the consumerisation of IT has changed the nature of communications, and modern military personnel have embraced it with a passion. 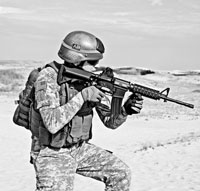 Military personnel have embraced BYOD with a passion

The technological advances that have been introduced in just a few short years, now make it possible for serving soldiers to club together and buy their own satellite dish and the monthly cost of accessing the internet. Today there are options for VoIP phones, cable service, and Internet, all either hardwired for LAN or using a wireless router to cover the living areas.

Speeds have increased significantly over the last few years and whereas it used to take over a minute to load a webpage, these days military personnel can Skype with their family & friends back home and even and browse the Internet.

Security is one of the areas that puts Bring Your Own Device under the spotlight and never more so than in the military.

We talk about best security practices for protecting corporate data, but in the military there’s far more at stake than the loss of some business intelligence. So with all of these avenues of communication so freely available, how is the military able to keep security under control?

For sending and receiving all classified information, the official military system requires personnel to log-in in order to get proper clearance. Furthermore these systems aren’t connected to the open network and are completely cut off from the outside and as everything has to be a wired connection for security, so there is no Wi-Fi.

But the system military personnel use to communicate with family and friends at home is no more secure than standard internet access and as a result security risks are always a concern and a constant part of the fight.

The interception of the satellite communication itself is a relatively minor concern. The danger is that a soldier will give away sensitive information to a friend or family member; and it can happen very quickly releasing real-time information of life-threatening intelligence value.

To try and prevent any sensitive information falling into the wrong hands, all soldiers (and their families) are briefed on what they can and can’t talk about and what they can share with people outside the family.

Of course there are lapses; one soldier emailed to his family saying that he wouldn’t be available at a certain time. This was because he was going to be on a mission; as a result the mission had to be rescheduled and the soldier in question was demoted and lost their security clearance.

The military also has rules surrounding the delicate matter of notifying the family in the event of a casualty; there is an immediate communication blackout period, so that the next of kin could be notified through proper channels.

The moral is all about morale

Nothing can take the place of being in direct contact but it’s the next best thing.

The military may be an extreme example, yet the benefits of allowing employees to use their own personal devices will never change. As people are being asked to work increasingly long hours and commute to work large distances, it makes equal sense to allow them to stay in touch.

Of course nothing can take the place of being in direct contact with your nearest and dearest, but the consumerisation of IT provides military personnel and millions of workers across all sectors with the next best thing.

Read more about Bring Your Own Device