The Pros and Cons of Allowing Mobile Devices in School

Nick Gibb, the schools minister, recently called for a ban on mobile devices in school due to a desire to limit the time children spend online

At the moment, it is the head teacher’s decision whether to ban mobile phones at school or not, and opinions are split on the matter.  Many people see  mobiles and tablets as useful and positive learning tools for both inside and outside the classroom.

However, most agree that children should be educated on the damage to their health that spending an unbalanced amount of time online can cause.  This is particularly important when it eats into time that is better spent doing homework, socialising, exercising, eating meals, and sleeping.

An opinion that keeps coming up in this discussion is that children should be taught to self-regulate their use of mobile phones, other digital devices, the internet, and social media, so that they can be responsible users of technology for the future.

To this end, schools are being encouraged to teach “relationships education” from September 2019 where pupils will learn about good health, both mental and physical, having positive relationships, and online safety.

The benefits of allowing mobile devices in school

There are a few obvious benefits of using mobile devices in school such as:

To keep abreast of technology

It’s possible that children could get behind in their knowledge and use of technology if they aren’t using it each day. The world is becoming increasingly technologically advanced, so young people need to have the digital skills to enter the workplace, which includes proper use of mobile devices.

To keep up with trends online

Social media is becoming one of the preferred methods of marketing for many companies and their main way of communicating directly with customers and clients. Knowledge of the latest mobile technology and the latest trends in social media is a marketable skillset that could land young people jobs after they’ve completed their formal education. Using social media can be seen as a life-skill. Some jobs such as PR require the monitoring of social media, and other roles, such as in social media management, focus solely on it.

When mobile devices are part of the school day and are used and integrated, their use is ‘above ground’ and visible to teachers and other staff. This allows for easy monitoring of use and helps to ensure the safety of pupils online and offline.

There is considerable peer pressure on children to conform; to be ‘liked’ on social media, and to have the latest handset. There’s also the use of sharing digital images via mobiles to harm or upset others.. This happens whether phones are allowed on school premises or not, but some schools have seen an increase when pupils use mobiles during school time.

Some schools have noticed a decline in bullying in general since banning mobile phones during school time. However, banning mobiles could have the effect of causing bullying and other pressures to become under-the-radar and hidden where teachers and parents can’t see them or help.

Pupils are likely to use social media during lessons and go on sites that aren’t useful or suitable for their studies. This can cause disruption in classrooms and is one of the most difficult types of disruption for a teacher to get a handle on.

It would be impossible for school staff to monitor the phone usage of all pupils, which leaves pupils open to attack and manipulation. However, if schools have their own devices to be used in class for educational purposes, they can set limitations and block specific sites as they wish.

Having expensive gadgets leaves children open to thieves who want to steal them.

Research done by the London School of Economics discovered that schools who banned mobiles had the effect of pupils receiving the equivalent of an extra week of education over an academic year. The study also found that pupils’ results in tests were up by 6% in schools that banned phones. 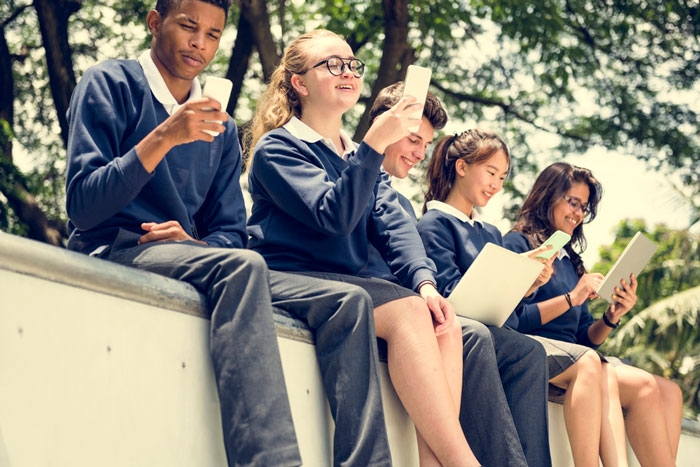 How are schools currently dealing with this issue?

Some schools have an outright ban on all personal mobile devices (including tablets) on the school premises and have a policy of confiscating them on the spot.

Some schools allow pupils to bring mobile phones onto the premises provided they hand them into reception at the beginning of the day and collect them at the end.

Allowed, but out of sight

Some schools allow phones on the premises, but they have to be out of sight in bags at all times. Again, these schools confiscate on sight.

As above but allowed for use at break time.

Some schools ban smartphones but allow standard mobiles that can only be used for calls and texts.

Some schools and teachers embrace the use of technology and allow proper use of phones in class. However, they remove them if pupils use them inappropriately.

So, there are benefits of allowing mobile devices in schools that could stretch beyond a pupil’s school years and into the workplace. There are also several drawbacks and issues that come directly from allowing pupils to have particularly mobile phones in school. So, is it best to ban or embrace mobile phones and other devices in schools? As with many things, it’s the way in which it is handled and managed that can make all the difference. Technology is neutral and it’s how it is used that creates benefits or drawbacks.

If you like the idea of your students having access to the technology, but are not happy to allow unrestricted use of personal devices, then why not consider your school providing them? Too expensive? Not necessarily. Leasing tablets and other IT equipment is a cost-effective way to provide your students with the technology they need, without blowing your budget.

Get more information here and then have a chat with the experts at Maxxia and see how we can help your school provide the best student experience, using the best up to date technology.