Robots in Industry – a Good or Bad Thing?

Every day and in every walk of life, technology is rapidly advancing. We’re all well-used to computers, mobile phones, even virtual and augmented reality. The sphere of manufacturing is no different. Of course, here too computers take a central role, but also there’s been a huge world-wide increase in the use of robots in industry and other fields generally.

The beginnings of robots in industry

Actually, the use of robots in industry is not anything new, by a long way. UNIMATE, manufactured by a US company called Unimation, was the first industrial robot to be used by a major manufacturer. It was invented in 1959 and installed by General Motors in its New Jersey plant in 1962. UNIMATE took care of spot welding, heated die-casting and other tasks which were unpleasant or potentially dangerous for human workers.

Since then, robots have become very familiar in the world of vehicle manufacture as well as the manufacture of many other products such as electronic component boards, for example. They still take on the more unpleasant tasks, but also many more jobs which require unfailing pinpoint precision.

What other industries use robots?

The use of robots in industry and elsewhere is becoming much more widespread. This is just a small sample of the areas which are starting to work with robotics:

Robotic instruments are being used, not to displace human professionals, but to assist them. The da Vinci Surgical System melds robot and human skills to reduce the invasiveness of some surgeries. The system translates the hand movements of the surgeon into precise movements of tiny robotic instruments, allowing for smaller incisions, less shock to the patient and faster healing rates. Have a look at this video of a surgeon working with the system – don’t worry, no blood is involved as he’s peeling a grape!

Robots have been used for some years again to relieve humans of dangerous tasks, like the assessment of bomb disposal situations. Now, unmanned robotic drones are being used for surveillance in war-torn areas and also for information-gathering at the scene of both natural and man-made disasters.

The aim of increasing productivity and lowering costs has spurred the agricultural community to use more technology in the industry. GPS-guided harvesters and tractors have been used for some time and now there are experimental robotic units which can undertake some of the more tedious and time-consuming tasks. These include:

Numbers of robots in industry

Robots in industry of all kinds are here to stay and will no doubt only increase in numbers over the coming years. The UK is currently lagging rather behind the global trend, according to a report from the International Federation of Robotics, with only 71 robots per 10,000 workers. Korea, Singapore, Germany and Japan all have a ratio of more than 300:10,000, and the USA almost 200:10,000. 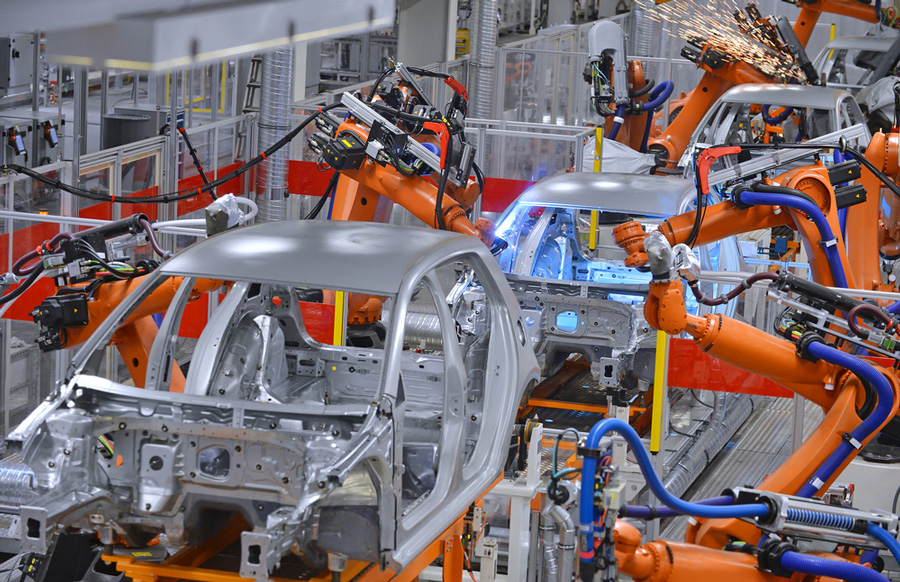 Pros and cons of robots in industry

There are advantages and disadvantages to all forms of technology and robotics is no different.

Pros of robots in industry

Increased productivity and efficiency – Human workers are just that – human. As such, they make mistakes and can’t be expected to provide exactly the same level of accuracy time after time, as a robot can. Robots also don’t get tired, don’t need breaks for rest and food and don’t need to sleep either. With routine maintenance, they can just keep going day and night at a constant 100%, increasing productivity for the company.

Lower costs – Although not cheap to buy, robots should be able to have a good ROI in a relatively short time. In terms of reliability, continuity of service and the precision which means less production rejects. While there are maintenance and other costs, robots don’t need to be paid a salary at the end of the month either.

Safer working environment – Robots in industry can help businesses improve the safety of working areas and the general work environment. They don’t make potentially dangerous mistakes, get repetitive strain injury, drop heavy tools on their feet or get themselves caught in machinery.

Cons of using robots in industry

Capital cost – The most obvious issue is the cost of the initial installation. However, when taken alongside the potential returns on that investment, it is often an option well worth considering. It’s obviously not a decision to be taken lightly and it requires careful consideration.

Programming – Purchase of the robots is only the first stage. It will then be necessary to have them programmed to do the specific tasks you require. This can involve using the services of an automation company, which can be expensive. However, further down the line, it’s possible to get some existing engineering staff trained to handle the continuing programming needs.

Robot limitations – Although there are many jobs that robots can do exceptionally well, there will always be some tasks that are better handled by humans. It’s imperative to consult a good robotics provider at the start of your thinking, to make sure your needs can actually be fulfilled by robots at all.

If you think that robotics may be the way to go for the future of your company and need help in spreading the cost of the initial investment, asset finance could help.

Have a chat with the experts at Maxxia. We can advise on the best finance method to help you achieve your goals. Read more about our asset finance solutions.